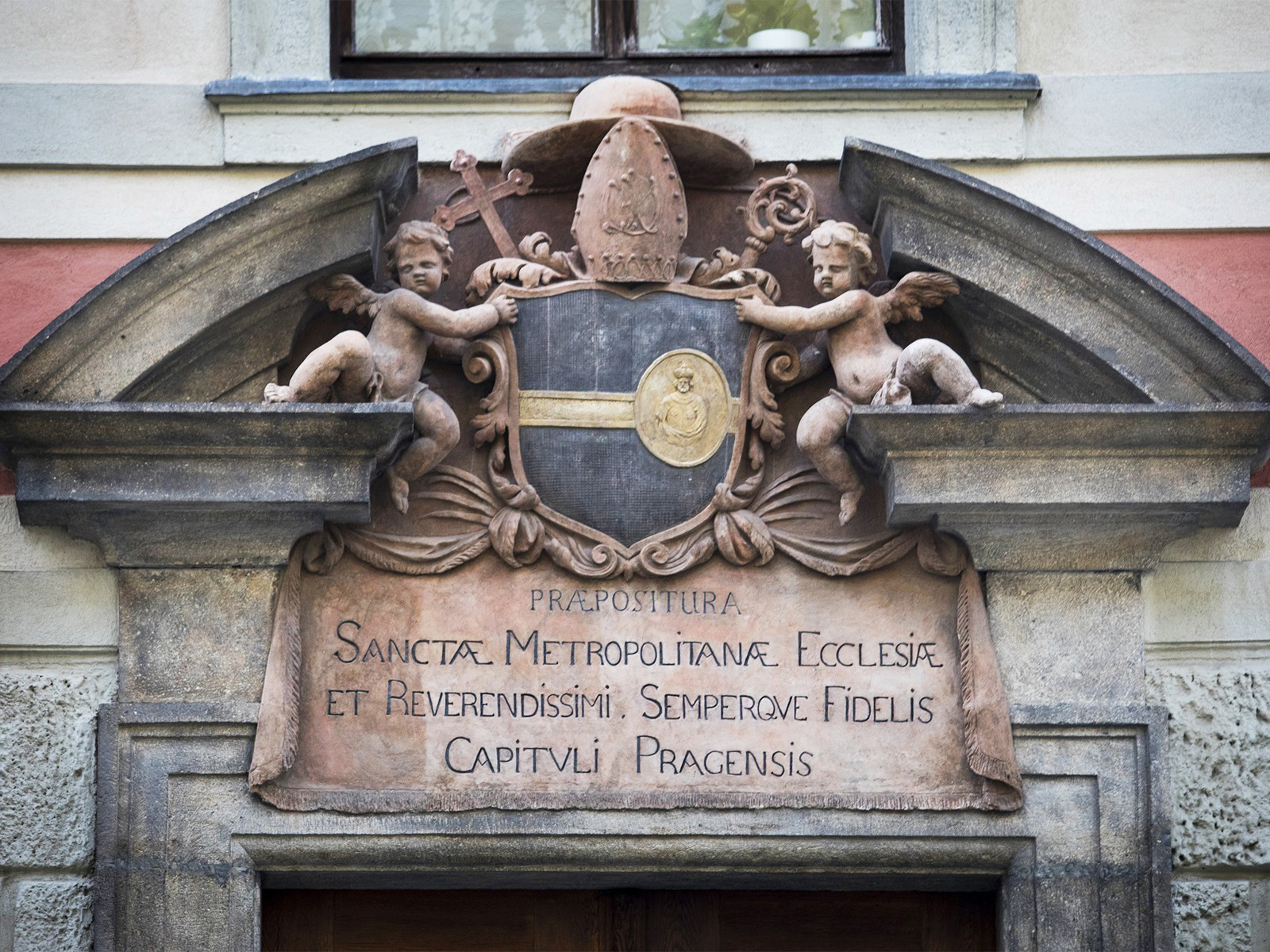 The beginnings of the Saint Vitus chapter date back to the college of priests (collegium cleri) at the Saint Vitus Cathedral in the Prague castle. The college was assigned the task to prepare all necessities for the establishment of an independent diocesan administration. When Prague, still belonging under the Metropolitan Archbishopric of Mainz, became the bishop’s residence in 937, the aforementioned college of priests has become the cathedral’s chapter. The founding document has unfortunately not been preserved.

From the beginning of the 13th century, the chapter of the Saint Vitus Cathedral was responsible for electing the bishop of Prague. The chapter also had a cultural and educational mission, aside from the tasks connected to the church itself. They had to oversee and manage the cathedral college until the establishment of the Charles University in Prague. The teachers went by the title of “master”, and it was home to many renowned scholars from across Europe. The cathedral's college became active immediately after the foundation of the bishopric in 973.

The Prague cathedral college has come to an end in 1248, but shortly afterwards, during the reign of Ottokar II of Bohemia, it has been re-established and ever since then it blossomed in a spectacular way. Around 1271 the college had three masters of Czech origin: masters Očko and Bohumil had lectures about grammar and logic, and master Řehoř of Valdek, who later became the archbishop of Prague, lectured about the natural science writings of Aristotle (De natura).

In 1347 the cathedral school formally started to function as a university with two faculties – philosophical and theological. These two faculties have become a part of the Charles University, along with two other faculties that were established later. From that moment until today, some members of Prague’s metropolitan chapter take their place as professors at the university. Some of them have even been elected as rectors.

In 1243 the Saint Vitus chapter elected its dean, Arnošt of Pardubice, to become the bishop of Prague. Just one year later he became the first archbishop of Prague. Prague’s cathedral has therefore become a metropolitan church and the Saint Vitus chapter has become a metropolitan chapter. This new order of the church’s administration also required a change in the status and the activities of the metropolitan chapter. This new situation is well captured by the oldest written statutes from November 18, 1350.

The Saint Vitus chapter stayed in touch with the Holy See and managed the archdiocese through elected administrators, also in the long period of the unclaimed post of the archbishop of Prague between 1421 and 1561. Since that time the chapter has been using the term “Semper fidelis” (always faithful) in its name. The emperor Charles VI. confirmed the official status of this name with a rescript from May 13, 1715. All the official instances, when communicating with the metropolitan chapter, had to use this extended name. The chapter has received several church as well as state privileges, the provost and and dean had the titles of “the first and second prelate of the Czech Kingdom” respectively. If they had no episcopal ordination, they often got the title of an apostolic pronopar by the Holy See, and some other members of the chapter became papal prelates.

Many members of the chapter were writers. Aside from the first Czech chronicler Kosmas or his contemporary chapter provost Mark, the most well-known historians are the chapter’s deans Vitus, Arnošt of Pardubice, Antonín Podlaha and the chapter’s provosts Jan Ignác Dlouhoveský and Mikuláš Tomek, to name a few. Some canons have also made a great contribution to the development of other areas of knowledge. For instance Doctor Karel Schuster held lectures at the university about botanics and he also wrote many professional treatises about this subject.

The books that were gathered by the Saint Vitus chapter served for personal study purposes of its members and for its cathedral school. The legacies of the individual members eventually brought a library to existence that belongs to the oldest and most treasured historical libraries in the Czech republic. One of the handwritten codexes that have been preserved is e.g. Fragmentum Evangelii of s. Marci. The historical archive department stores the oldest preserved original of a vellum paper from 1177. The metropolitan chapter has also dedicated great efforts to publishing activities. After consulting the national revivalist J. V. Kamarýt, an educational edition called “St. Jan’s heritage” has been established in 1831. Later (1861) “St. Prokop’s heritage” followed, for the more demanding scientific publications, and lastly “Editiones Archivii et Bibliothecae S. F. Metropolitani capituli Pragensis" has been founded for the publication of manuscripts and archival materials. The activity of these editions has been terminated after February 1948. The library itself, or better a historical book fund, is currently being used for specialized educational and scientific purposes.

In the 14th century was the construction of the new gothic cathedral under the supervision of the canons of the metropolitan chapter (who initially had the title “magister fabricae”). Their effigies can be seen in the inner triphorium of the cathedral as portrait busts. This activity has later been continued by canons with the title “canon kustos”. One of them, Václav Michael Pěšina, started in 1832 his efforts to establish a company for the completion of the cathedral’s construction. The gubernatorial offices in Vienna haven’t been very fond of this initiative, but in spite of that, the “Union for the completion of the St. Vitus cathedral” has been founded in 1859. The cathedral’s construction has been finally finished in 1929 during the presence of the president of Czechoslovakia T. G. Masaryk and the archbishop F. Kordač. The whole construction has taken as long as 585 years.

The chapter as a whole as well as its individual members were actively starting various foundations with cultural and social missions (e.g. for gifted and poor students). Among these foundations were for example “Provost and chapter jubilee support for talent” and “Provost and chapter jubilee support for the payment of worship costs of the grand cathedral of St. Vitus in Prague”.

The metropolitan chapter has been fulfilling its cultural and educational mission until the first half of the last century. That’s when it was stripped of the last sources of material means, and consequentially it barely stayed alive and capable of maintaining the remaining living quarters. In 2006 and 2007, the metropolitan chapter took over the maintenance of the St. Vitus cathedral, St. Wenceslas cathedral and St. Vojtěch cathedral again, as well as other buildings. It’s therefore fulfilling its original purpose again; the maintenance of the cathedral and liturgical activity. It also stores and preserves the precious Saint Vitus treasure, hidden in the cathedral. The chapter is also trying to resume its cultural and educational mission. Together with the management of the Prague Castle, the chapter prepared an exhibition of a part of the treasure in the Chapel of the Holy Cross. The visitors can see valuable liturgical items and reliquaries that are being used during various liturgical festivities. Such as the traditional festival of the Saint Vitus Organ nights, organized under the auspices of the Prague archbishop, in cooperation with the management of the Prague castle. The metropolitan chapter also leads the Prague cathedral choir, Children’s cathedral choir and the Prague cathedral school. Being the owner of a number of cultural monuments, the chapter cares for their state and renovations with the goal of preserving the cultural heritage for the following generations.